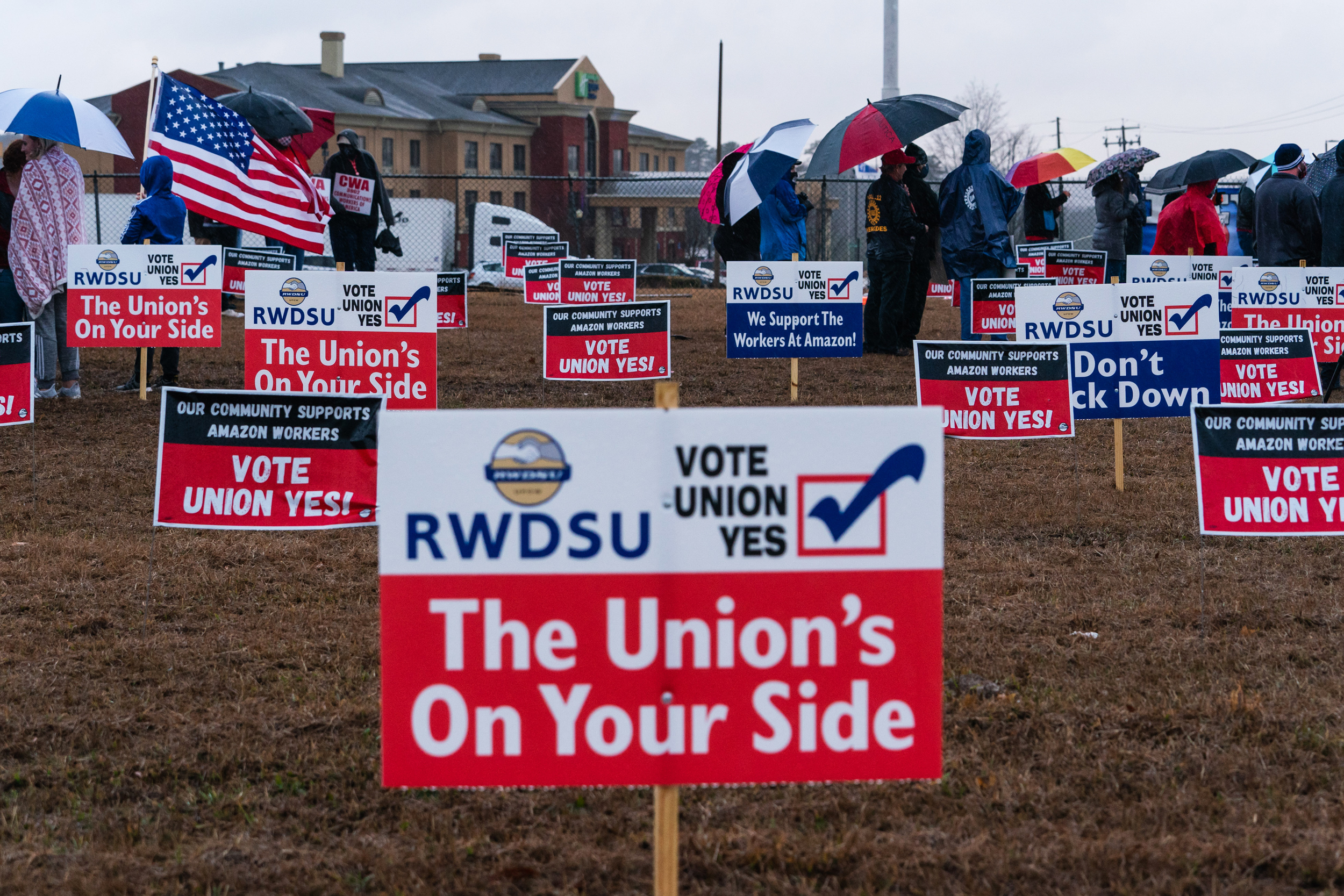 The Teamsters, one of the largest labor unions in the United States, is launching a national effort to unionize Amazon workers in an official resolution that will be put to a vote among union members later this week.

The resolution, first obtained by Motherboard and reviewed by NBC News, describes the Teamsters’ plan to create and fund a dedicated Amazon division to help workers in its logistics business organize and demand better working conditions.

On Thursday, representatives from about 500 local Teamsters unions will vote on whether to adopt the “Special Resolution; Building Worker Power at Amazon,” during a virtual convention, Teamsters spokesperson Kara Deniz confirmed in a statement Tuesday.

“[B]uilding worker power at Amazon and ultimately helping Amazon workers achieve a union contract is the highest priority for the Teamsters Union,” the resolution states.

“The International Brotherhood of Teamsters recognizes that there is no clearer example of how America is failing the working class than Amazon,” it says. “From its start as a book retailer, Amazon has grown to become an ecommerce giant and has disrupted industry after industry and displaced hundreds of thousands of jobs.”

The Teamsters have spent five years speaking to thousands of Amazon workers to develop the best strategies for organizing, the resolution states. The announcement comes during Prime Day, Amazon’s annual sales event and one of the busiest times of the year for workers in the company’s warehouses.

Amazon did not immediately respond to a request for comment.

“We respect our employees’ right to join, form or not to join a labor union or other lawful organization of their own selection, without fear of retaliation, intimidation or harassment,” Amazon spokesperson Leah Seay told NBC News in March.

She added that Amazon offers a $15-an-hour starting wage, benefits and a clean working environment for its employees.

“It’s definitely too soon to speculate on chances for success, but it is a very strong statement of intent by the Teamsters in terms of the resources they are willing to put into a campaign to organize Amazon workers,” said Rebecca Givan, an associate professor of management and labor relations at Rutgers University.

The Teamsters’ strategy is to organize workers across the entire company, including contracted delivery drivers. This means it will not rely on the traditional National Labor Relations Board election process, which involves running union elections in individual warehouses. Instead, organizers will focus on petitions, work stoppages and other forms of collective action to pressure Amazon to recognize a union.

“The odds are generally stacked against workers and organizing no matter which strategy they choose, but it certainly seems like the time is right to think big and nationwide collective action could certainly threaten Amazon’s bottom line,” Givan said.

She added that one of Teamsters’ strengths is its network of 1.4 million members in the United States and Canada who “understand the advantage they have from being unionized” and can have “thousands of organizing conversations” with Amazon workers who are “being treated as disposable.” Amazon is the second-largest employer in the country.

The national push by the Teamsters follows an unsuccessful drive to unionize an Amazon warehouse in Bessemer, Alabama, with the Retail, Wholesale and Department Store Union this year. Workers voted against forming the union in April in a vote conducted by the National Labor Relations Board following months of high-pressure campaigning from Amazon, which hired anti-union firms to dissuade workers from unionizing.

The outcome of the vote is currently being challenged, and the NLRB held a hearing last month where workers detailed being retaliated against for being pro-union. Workers at Bessemer interviewed by NBC News said Amazon’s anti-union tactics included placing signs above toilets in the bathroom to discourage joining the union, anti-union banners hung across the workplace and mandatory meetings where the cons of joining a union were emphasized to workers.

Since the start of the pandemic, workers at Amazon warehouses across the country have organized to push the company to improve working conditions. They have asked for reduced staffing, better cleanliness and personal protective gear to help stop the spread of the coronavirus, which surged through Amazon warehouses that remained operational while much of the rest of the country stayed home. Thousands of Amazon workers contracted the coronavirus, and at least 10 died, according to data collected by Amazon employees and shared with NBC News last year. Multiple workers also said they were fired or retaliated against while making demands for safer working conditions.

At least 37 charges were filed to the NLRB against Amazon accusing the company of interfering with workers’ rights to organize or form a union during the course of the pandemic, more than triple the number of cases filed against the company in 2019, according to NLRB charges analyzed by NBC News.

Amazon has effectively worked to dissuade its massive warehouse and logistics workforce from unionizing for years. In 2018, the company produced a 45-minute anti-union video for team leaders in its Whole Foods stores. There were two failed union drives in Amazon facilities in Chester, Virginia, and Middletown, Delaware, in 2014 with the International Association of Machinists and Aerospace Workers. Now the Teamsters are taking a different tack.

In February, The Des Moines Register reported that the Teamsters has been organizing Amazon warehouses in Iowa and were not planning on pursuing the National Labor Relations Board election process. Instead a Teamsters organizer said the union plans to push the company through worker strikes. The Teamsters currently represent employees for UPS’ logistics operations.

Workers at Amazon who have participated in union efforts this year say the company knows how to put up a fight. “A lot of employees are scared, confused, feel like they’re being intimidated that they might lose their job,” Darryl Richardson, an Amazon employee in Bessemer, Alabama, who supported the union drive, said in an interview last February. “The company was saying that they’ll shut it down and we’ll lose our wages and benefits and the union can’t guarantee anything.”